Click on the book titles to see them in our catalog. (It may take a minute for our catalog to load.)

Have you read any of these books? What did you think? What were your favorite books from last year?

The Newbery Medal is awarded to the author of the most distinguished contribution to American literature for children. See more information about the Newbery Medal and past winners here. 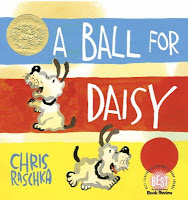 A Ball for Daisy written and illustrated by Chris Raschka

The Geisel award is given to the author(s) and illustrator(s) of the most distinguished American book for beginning readers published in English in the United States during the preceding year. See more information about the Geisel Award and past winners here. 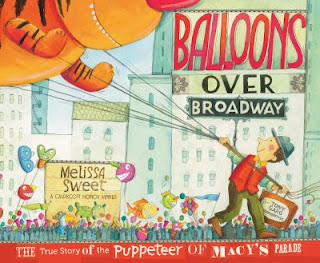 Balloons Over Broadway: The True Story of the Puppeteer of Macy's Parade by Melissa Sweet

The Robert F. Sibert Informational Book Medal is awarded annually to the author(s) and illustrator(s) of the most distinguished informational book published in the United States in English during the preceding year. See more information about the Sibert Medal and past winners here.

Tomie dePaola - See a list of his books in our library here.

The Wilder Award honors an author or illustrator whose books, published in the United States, have made, over a period of years, a substantial and lasting contribution to literature for children. See more information about the Wilder Award here.