Books that we have in our library are listed below.  See the complete list of winners here and check our catalog to see which ones are available or reserve them.

Newbery Medal for the most outstanding contribution to children's literature:

The One and Only Ivan by Katherine Applegate.
When Ivan, a gorilla who has lived for years in a down-and-out circus-themed mall, meets Ruby, a baby elephant that has been added to the mall, he decides that he must find her a better life.
Read about the real Ivan who inspired the story here.


Caldecott Medal for the most distinguished picture book for children:

This Is Not My Hat illustrated and written by Jon Klassen
A tiny minnow wearing a pale blue bowler hat has a thing or two up his fins in this underwater light-on-dark chase scene.


Caldecott Honor Books in our library: 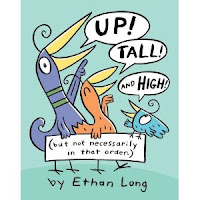 Up, Tall, and High! by Ethan Long
Through illustrations and simple text, birds demonstrate the meanings of the words up, tall, and high.

Geisel Honor Books in our library:

Pete the Cat and His Four Groovy Buttons by Eric Litwin, created and illustrated by James Dean
Let's Go for A Drive (an Elephant and Piggie book) by Mo Willems 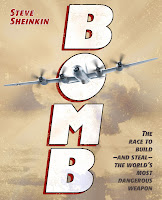 Bomb: The Race to Build - and Steal - the World's Most Dangerous Weapon by Steve Sheinkin
Recounts the scientific discoveries that enabled atom splitting, the military intelligence operations that occurred in rival countries, and the work of brilliant scientists hidden at Los Alamos.

Sibert Honor Books in our library:

Electric Ben: The Amazing Life and Times of Benjamin Franklin by Robert Byrd
Titanic: Voices from the Disaster by Deborah Hopkinson

Laura Ingallls Wilder Award honors an author or illustrator whose books have made a substantial and lasting contribution to literature for children.  This year's winner is Katherine Paterson.  Her books in our library include Bridge to Terabithia and The Great Gilly Hopkins.

In Darkness by Nick Lake
In the aftermath of the Haitian earthquake, Shorty, a poor, fifteen-year-old gang member from the slums of Site Soleil, is trapped in the rubble of a hospital and as he grows weaker, he has visions and memories of his life of violence, his lost twin sister, and of Toussaint L'Ouverture, who liberated Haiti from French rule in 1804.

Printz Honor Book in our library:

Code Name Verity by  Elizabeth Wein
In 1943, a British fighter plane crashes in Nazi-occupied France and the survivor tells a tale of friendship, war, espionage, and great courage as she relates what she must do to survive while keeping secret all that she can.

Somebody Please Tell Me Who I Am by Harry Mazer and Peter Lerangis
Wounded in Iraq while his Army unit is on convoy and treated for many months for traumatic brain injury, the first person Ben remembers from his earlier life is his autistic brother.


Margaret A. Edwards Award for lifetime achievement in writing for young adults.  This year's winner is Tamora Pierce.  Her books in our library include the Song of the Lioness series and Protector of the Small series.