Creatures of the Night

Nancy from Howell Nature Center brought six nocturnal animals for us to see and learn about today.  We met a great horned owl, a flying squirrel, an Eastern screech owl, a European ferret, a barn owl, and an opossum.

All of the animals we saw today are from Howell Nature Center's Wild Wonders Wildlife Park which provides homes for animals and birds that are not able to live in the wild.

Great Horned Owl
This great horned owl is 24 years old and has been living at Howell Nature Center since he was young.  He, like all owls, can fly silently due to the type of feathers at his wingtips.  He has excellent hearing which is enhanced by his ears being at slightly different heights. 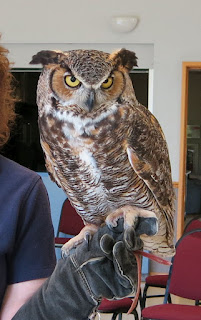 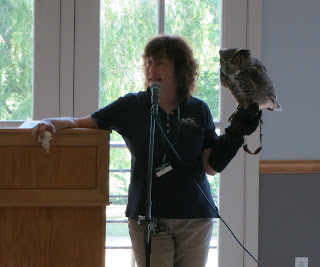 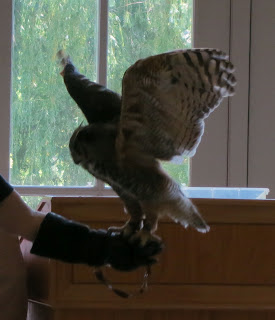 Flying Squirrel
Flying squirrels have skin stretched from their wrists to their ankles which allows them to glide similar to a kite.  Like all nocturnal animals, he has large eyes. 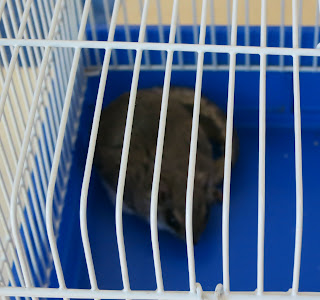 Eastern Screech Owl
This owl's name is Farley.  Eastern screech owls may be red or grey;  Farley is a grey phase owl.  He, as all of the owls today, was very interested in something in the park; he kept looking out the window at the geese and other animals outside. He arrived at Howell Nature Center after his wing was injured when the tree he lived in was cut down.  Due to the damage to his wing, he can not fly.  Although this owl was quiet today, we heard a recording of a screech owl and learned that it sounds similar to a horse. 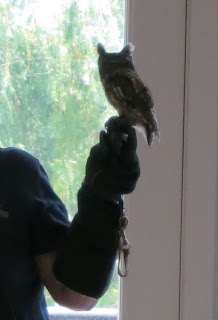 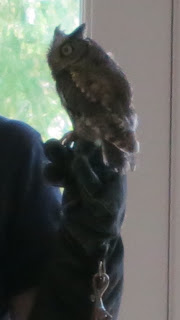 European Ferret
Ferrets are a type of weasel and are in the Mustelidae family.  Like ferrets kept as pets, this ferret has had its scent glands removed. 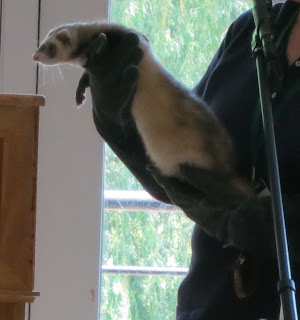 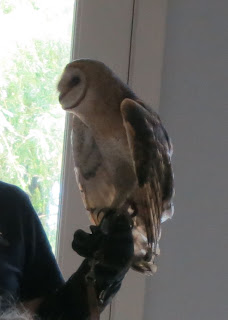 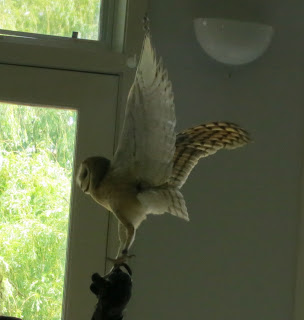 Opossum
This opossum loves broccoli and walked back and forth across the table to find and eat more.  Opossums are marsupials.  Baby opossums are about the size of the tip to the first knuckle of a pinkie finger.  They live in the mother's pouch for about two months.

Usually when you find a baby animal alone, you should leave it where you find it because the mother will return.  Opossums are an exception to this rule.  Mothers often will not realize they have lost a baby, so young opossums alone should be reported to an appropriate facility to help them.

Contrary to popular belief, opossums can not hang by their tails. They can use their tails to help them climb or hold things, but their bodies are too heavy to hang by them. 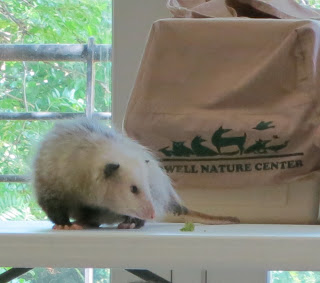 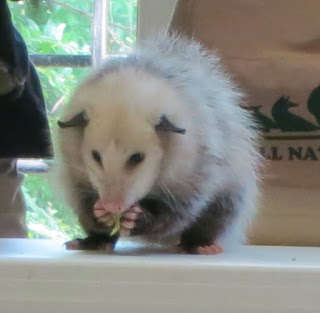 The human owl
Owls eyes are very large.  Like other nocturnal animals, their large eyes help them see at night.  If humans' eyes were proportionately the same size as owls' eyes, this is what our eyes would look like.  Our volunteer also had an owl wing to demonstrate how quietly owls can fly. 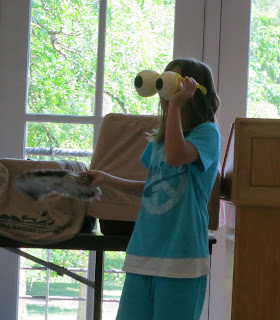 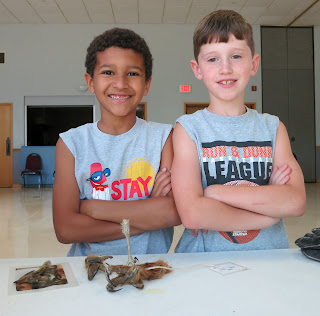 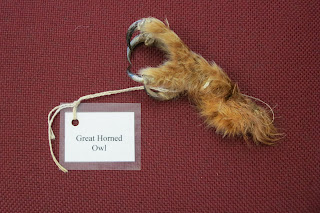