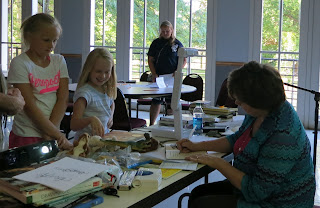 Ruth McNally Barshaw, author and illustrator of the "Ellie McDoodle" series of books, presented two sketch workshops on June 25 as part of our Summer Reading Program.

Ms. Barshaw is currently writing the fifth book in the Ellie McDoodle series. She explained the time line for its publication, discussed her writing process, and showed the children some of her illustrations for the book.

Ms. Barshaw guided the children and parents through creating their own artwork during the workshop. She began by drawing "Ellie McDoodle" words - sketches created from the letters of a word. The letter "o" in the word dog became the face of a dog, the "c" in cat became a cat, and the "p" in penguin became a penguin.

She then encouraged children to look for shapes in illustrations and to use shapes as the basis for their own drawings. After identifying shapes within other illustrators' works, she guided the participants through drawing a squirrel beginning with a triangle and circle and connecting and embellishing those shapes to create the squirrel.

Ms. Barshaw sketched additional animals at the children's request. When one requested a goose, she commented that she didn't know if she had ever drawn a goose and moved to the window to observe the geese in Wilson Park as she sketched them.  She explained various techniques for sketching new things, such as observing the animal or person, taking photographs, or looking at photographs online or in books.

During the workshop for third through fifth graders, Ms. Barshaw also discussed characterization. She guided the children through drawing a mouse and then demonstrated how to change its features to create a cute mouse, a funny mouse, and an evil mouse. Different proportions, accessories, and shading all contributed to develop the character. 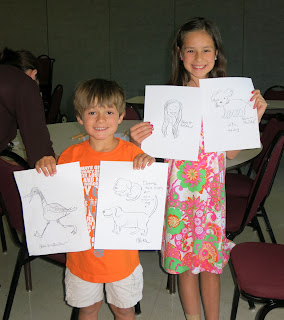